• Prime Minister Narendra Modi and his British counterpart Boris Johnson recently agreed on a new and expanded India-U.K. defence partnership and vowed to seal an ambitious free trade agreement by the end of the year.

• Amidst the growing ties between India and UK, the PM of UK stated that UK is planning to provide an Open General Export Licence (OGEL) for India.
• This is seen as a mechanism to support greater defence and security collaboration in the future.
• It is also a matter of fact that this is the first British OGEL in the Indo-Pacific region.
• The Prime Minister of UK states that the negotiations are going on for the FTA which will be closed before October of this year.
• PM also responded positively stating that in the last few months, India has concluded Free Trade Agreements with UAE and Australia.
• At the same pace, with the same commitment, we would like to move forward on the FTA with the U.K. as well.

• On the Ukraine issue PM Modi stressed an immediate ceasefire and resolution of the problem through dialogue and diplomacy.
• On the Indo Pacific the PM pitched for a free, open, inclusive and rules-based order in the region.
• And also raised concerns about the instability in Afghanistan and reiterated that the Afghan territory must not be utilized for terror activities. 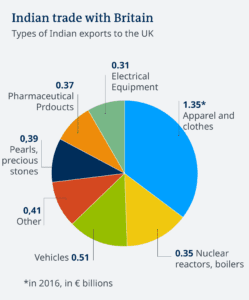