• A country with long time of war neutrality has decided to join a military alliance, this stand of Finland is significant in terms of international political order.

What is Russia’s response?

• Kremlin has reacted bitterly by stating that this move is seen by Russia as a threat and warned of a possible retaliation.

• Finland has always stayed away from the power tussle and had always maintained cordial relations with both west and Russia.
• The Finns idea of neutrality has come to an end after the Russian invasion over Ukraine.
• The President stated that the country’s membership in the alliance will strengthen its security.
• The public poll regarding the joining of Finland to the alliance has received about 75% of votes which used to be around 25% before the Russian invasion over Ukraine. • In 1939 Finland had lost over ten percent of its territory to Russia when Russia had invaded Finland.
• But still the country had decided to remain non-aligned in the cold war era but the apprehensions began after the Russian annexation of Crimea.

• Sweden, another bordering country of Finland is also likely to follow Finland in joining the alliance.
• If Finland joins, Sweden will be the only Nordic non-member of NATO. 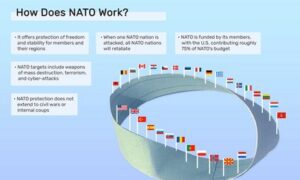