Chinese Footprint in the Pacific Region Chinese Footprint in the Pacific Region

• During a meeting with the 14 Pacific Island Countries, China’s effort to push through a comprehensive framework deal, the draft of which was leaked earlier, failed to gain consensus among the PICs. 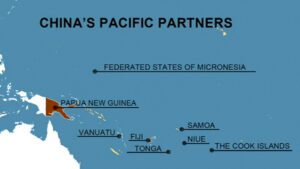 Which are the PICs:

• The Pacific Island Countries are a group of fourteen countries which are located in the tropical zone of the Pacific Ocean. They are:
• Cook Islands, Fiji, Kiribati, Republic of Marshall Islands, Federated States of Micronesia (FSM), Nauru, Niue, Palau, Papua New Guinea, Samoa, Solomon Islands, Tonga, Tuvalu and Vanuatu.
• Micronesia, Melanesia, and Polynesia are the three separate parts of the islands based on physical and human geography.
• The islands have a modest land area and are dispersed across the Pacific Ocean’s enormous equatorial sweep. 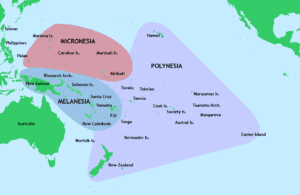 What is the significance of this region?

• Though these small states are too small in terms of land area, they possess some of the largest Exclusive Economic Zones (EEZs) in the world.
• As a result of this they are enriched with huge resources including fisheries, energy, minerals and other marine resources.
• This translates into huge economic potential for these Pacific Island States.
• These Pacific Island States have a played a huge role in the major power rivalries due to their strategic location.
• The Pacific islands also acted as one of the major theatres of conflict during the Second World War — between imperial Japan and the U.S.
• The region has also witnessed numerous nuclear weapons testing given the remoteness of theses states.

What are China’s interests in the region?

• In contrast to Western powers, China has no specific historical ties to the PICs.
• As a result, its interest in PICs is relatively new, and it is related to China’s rise in recent decades.
• The PICs are along the logical path of China’s maritime interests and naval force buildup.
• They are located beyond China’s ‘Initial Island Chain,’ which marks the country’s first maritime expansion boundary.
• The PICs are strategically positioned in China’s ‘Far Seas,’ control of which will enable China to develop an efficient Blue Water capable Navy, which is a prerequisite for becoming a superpower.
• In addition to its economic diplomacy with the PICs, China has begun to talk about security cooperation.
• China inked a contentious security agreement with the Solomon Islands in April 2022, raising regional fears.
• Two draught documents prepared by the Chinese side were leaked prior to Wang Yi’s current tour, attracting the attention of Pacific regional leaders as well as the greater world community.
• The “China-Pacific Island Countries (PICs) Common Development Vision” is one of the documents, while the “China-Pacific Islands Five-Year Action Plan on Common Development (2022-2026)” is another.
• The vision presents a general proposal for cooperation in the fields of politics, security, economics, and strategy, whereas the action plan outlines more precise details of cooperation in specific areas.