Debate on Hindi as ‘national language’ Debate on Hindi as ‘national language’

• An exchange on Twitter between Bollywood actor-director Ajay Devgn and Kannada actor Sudeep over the status of Hindi as “rashtriya bhasha” has provoked a big debate on social media.

• No language is designated as a “national language” by the Constitution. Assamese, Bengali, Bodo, Dogri, Gujarati, Hindi, Kannada, Kashmiri, Konkani, Malayalam, Manipuri, Marathi, Maithili, Nepali, Oriya, Punjabi, Sanskrit, Santhali, Sindhi, Tamil, Telugu, and Urdu are among the 22 ‘Official Languages’ listed in the Eighth Schedule.
• The Official Languages Act of 1963 specifies English and Hindi as the official languages of the Union government, including commercial transactions in Parliament, Central and State Acts, and certain High Court proceedings.
• The Act stipulates that “the English language shall be utilised for purposes of communication between the Union and a State that has not accepted Hindi as its official language.” 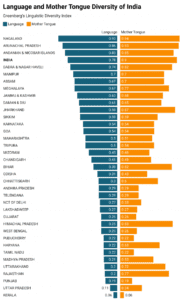 • Article 344 – Commission and Committee of Parliament on official language
• The President shall, at the expiration of five years from the commencement of this Constitution and thereafter at the expiration of ten years from such commencement, by order constitute a Commission which shall consist of a Chairman and such other members representing the different languages specified in the English Schedule as the President may appoint, and the order shall define the procedure to be followed by the Commission
• Article 351 – The duty of the Union to encourage the spread of the Hindi language to advance it so that it may serve as a medium of communication for all the components of the composite culture of India and to safeguard its enhancement by integrating without interfering with its genius, style and expressions used in Hindustani and in the other languages of India specified in the 8th Schedule, and by drawing, anywhere essential or required, for its terminology, mainly, on Sanskrit and secondarily on other languages.