• The G20 is a global strategic platform that brings together the world’s biggest industrialised and emerging economies.
• The G20 has a critical role in ensuring global economic growth and prosperity in the future.
• The G20 countries together account for more than 80% of global GDP, 75% of international trade, and 60% of the world’s population.
• The G20 began in 1999 as a meeting of finance ministers and central bank governors, and has since grown into a yearly summit of heads of state and government.
• Additionally, during the year, Sherpa meetings (charged with carrying out talks and forging consensus among Leaders), working groups, and special events are held.

Who are the members? 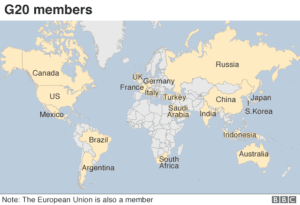 • From December 1, 2022, until November 30, 2023, India will occupy the G20 presidency, culminating in the G20 Summit in India next year.
• The decision has been made to establish the secretariat and other structures.
• The G20 Secretariat will handle all aspects of India’s presidency of the intergovernmental forum, which includes 19 countries and the European Union, including knowledge, content, technical, media, security, and logistical issues (EU).
• The presidency of the G20 rotates every year among its members, with the country that holds the presidency working together with its predecessor and successor, also known as Troika, to ensure the continuity of the agenda. Currently Italy, Indonesia, and India are the Troika countries.