Recently, the first photograph of a supermassive blackhole was revealed by the astronomers of the Event Horizon Telescope (EHT). This supermassive blackhole named Sagittarius A, is twenty six thousand light years from the Earth and situated at the centre of the Milky Way Galaxy.
A black hole is a place located in the space where gravity pulls so much that even light cannot escape out of it.
The reason for the strength of the gravity is because the matter has been squeezed into a tiny space.
Black holes are formed when the stars collapse or at the verge of dying.
Black holes are invisible because the light cannot escape out of it and they can be tracked only with the help of spatial telescopes About the Event Horizon Telescope:

The Event Horizon Telescope is an international collaboration with a goal to directly observe the immediate environment of a black hole.
EHT is a large telescope array consisting of a global network of radio telescopes
The first image of a black hole M87 at the center of the galaxy Messier 87 was published by EHT in 2019. 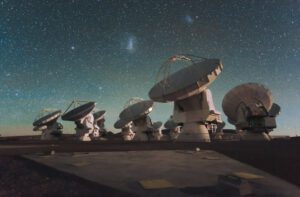 What is escape velocity ?

Escape velocity is the minimum speed required for an object to escape from the gravitational influence of a primary body.