• A set of four islands situated between the Sea of Okhotsk and the Pacific Ocean near the north of Japan’s northernmost prefecture, Hokkaido are under dispute as both Moscow and Tokyo claim sovereignty over them. • However, since the end of World War II, they have been under Russian administration.
• Two of the four islands were proposed to be returned to Japan once a peace treaty was completed in 1956. Despite signing the Japan-Soviet Joint Declaration, which restored diplomatic relations, the two countries were unable to sign a peace treaty due to ongoing disputes.
• Japan’s Foreign Minister claimed shortly after Russia’s invasion of Ukraine that Russia had “taken” the southern half of the Kuril Islands, in violation of international law.
• In addition, Russia’s “illegal occupation” of the Kuril Islands was described in Japan’s recent Diplomatic Bluebook for 2022.

• Several treaties, according to Tokyo, confirm Japan’s sovereignty over the islands, including the Shimoda Treaty of 1855, the 1875 Treaty for the Exchange of Sakhalin for the Kuril Islands (Treaty of St. Petersburg), and the Portsmouth Treaty of 1905, signed after Japan’s victory in the Russo-Japanese war of 1904-05.
• Russia, on the other hand, contends that the Yalta Agreement (1945) and the Potsdam Declaration (1945) establish its sovereignty, and that the San Francisco Treaty of 1951 establishes Japan’s recognition of Russian sovereignty over the islands.
• Japan has “renounced all right, title, and claim to the Kuril Islands,” according to Article 2 of the pact.
• Japan, on the other hand, claims that the San Francisco Treaty cannot be applied because the Soviet Union never signed it.
• In addition, Japan refuses to acknowledge that the four disputed islands were previously part of the Kuril chain. In fact, because they did not sign a peace treaty after World War II, Japan and Russia are still formally at war.
• During Japanese Prime Minister Ichiro Hatoyama’s 1956 visit to the Soviet Union, it was suggested that after a peace treaty was concluded, two of the four islands would be returned to Japan.
• Despite signing the Japan-Soviet Joint Declaration, which restored diplomatic relations between the two countries, persistent disputes hindered the signing of a peace treaty. 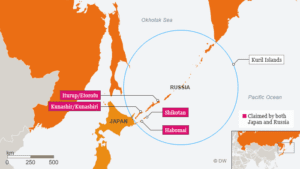 Is there a solution?

• There have been numerous attempts to conclude the conflict and sign a peace treaty since 1991.
• Prime Minister Abe made the most recent attempt when he looked at joint economic development of the disputed islands.
• In fact, based on the 1956 Japan-Soviet Joint Declaration, both countries pledged to hold bilateral talks.
• After the conclusion of a peace treaty, Russia was even willing to return two islands to Japan, the Shikotan Island and the Habomai Islands, as stated in the 1956 declaration.
• Japan’s efforts to develop relations with Russia were motivated by a desire to diversify its energy sources, while Russia sought to diversify its buyer base and attract foreign investment.
• However, nationalist passions on both sides kept the conflict from being resolved.