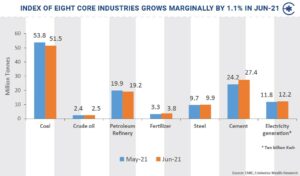 What are the Core Industries?

• These sectors which have a huge impact on the economy plays a huge role.
• These eight core industries which together make upto 40.27% of the Index of Industrial Production (IIP).
• The Index of the Eight Core Industries is released by the Office of the Economic Adviser (OEA), Department for Promotion of Industry and Internal Trade (DPIIT), and Ministry of Commerce & Industry every month.

What is the current status?

• The combined index has been increased by 8.4% when compared to the index of April 2021. 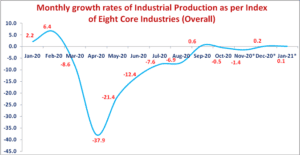 • The Index of Industrial Production (IIP) is a composite indicator that measures the short-term changes in the volume of production of a basket of industrial products during a given period with respect to that in a chosen base period.
• In India, the first official attempt to compute the Index of Industrial Production (IIP) was made much earlier than the first recommendation on the subject came at the international level.
• With the inception of the Central Statistical Organization (now known as National Statistics Office (NSO)) in 1951, the responsibility for compilation and publication of IIP was vested with it.