Moving Away from Coal based Energy Production Moving Away from Coal based Energy Production

• Apart from the two states mentioned above some other high power consuming states such as Gujarat are planning to import coal.
• Declining coal stocks and power outages in the country has raised the question of role renewable energy as an alternative for the future.

• Coal accounts for 55 percent of the country’s energy demands. According to the International Energy Agency’s (IEA) India Energy Outlook 2021 study, India’s energy consumption has doubled since 2000, with coal, oil, and solid biomass still meeting 80% of demand.
• Pandemic-related interruptions, on the other hand, prohibited coal from being stored.
• To stop the infection from spreading, mining operations were suspended.
• Mining activities were delayed during the monsoons, delaying the arrival of stockpiles, despite the gradual ease into operations.
• A demand-supply mismatch has resulted as home demand for power rises with the coming of summer, along with a rapid acceleration in economic activity. 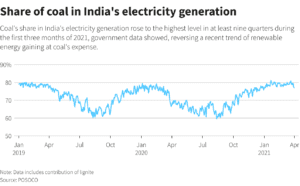 Why is Coal preferred?

• The main reason for the usage of coal as a means of energy production is that it is available abundantly.
• And also the coal based plants take in lesser capital investments compared to other means of production.
• hydel and nuclear plants especially needs multiple times of investment, even though they are much sustainable than the coal based production, the cost estimates don’t match.
• That is why recently the union minister held that “Despite push for renewables, [the] country will require base load capacity of coal-based generation for stability and also for energy security”

Status of Renewable energy in India:

• Central Electricity Authority has proclaimed that the country will achieve 40% of its energy generation through renewable sources.
• The central government is also spending aggressively on the implementation of replacing the current means of energy production with renewable based energy sources.
• According to government estimates, 152.90 GW of renewable energy capacity had been installed in the country as of February 28.
• Solar power accounts for 50.78 GW, wind power for 40.13 GW, bio-electricity for 10.63 GW, small hydel power for 4.84 GW, and large hydel power for 46.52 GW.
• The Ministry of New and Renewable Energy aims to install 500 GW of energy capacity from non-fossil fuel sources by 2030, as announced by the Prime Minister at COP26 (the United Nations Climate Change Conference in 2021).